First of all I want to say thanks for hosting me on your blog and letting me write this guest post!

I am Florian Müller from Germany, working as a Sysadmin at a small tech collective. I have been a KDE user for years, but I am quite new to the KDE community. This years Akademy was my first and I am looking forward to dive in deeper and contribute more to KDE.

I had a really good time at Akademy in Milano, got to know so many cool people and learned a lot about the KDE community and KDE in general. Thanks a lot to everyone organizing this unique event! I am sure it won't be the last time I'll attend Akademy.

I want to share some things I noticed about discussion culture, please feel free to criticize/discuss/comment, so maybe we can work out some guidelines for that in the future.
First of all some words about discussion culture in general. Because all people are different, we need technics to allow everyone to participate in group discussions. When people are not that confident in general, they tend to not raise their voices in bigger groups, also if they have opponent opinions to the main stream. So in order to have a greater culmination of creativity and ideas, we need to create an atmosphere to make it easier for everyone to participate.

One thing would be the setup of the room the discussion will be held in. Do you want to have a central speaker in the front leading the discussion or do you want to setup the chairs and tables in a circle so everyone is on the same level. Sometimes there are mostly lecture halls available, so time to plan in advance and ask for a different room has to be taken in accountance. The advantage of a circle is that everybody is able to see everyone else. We can also think about forming smaller discussion groups when possible and a topic can be split up into smaller parts.

Another point you can think about is how you organize the turn keeping. One could appoint a person who only deals with turn keeping. We could alternate the job of turn keeping from one discussion to the next. At the beginning of the discussion we should make it transparent on how turn keeping will work. For example we could have a rule that people who want to say something the first time, move to the top of the speakers list to make sure that rare voices will be heard. We could also have a speakers list alternated by gender. There could be a maximum time for speakers so that single people don’t dominate the whole discussion by simply talking others out.

There are many other aspect we can think about when we want to make group discussions more inclusive. With this post, I just wanted to get the discussion started, so we can improve on that in the future.

Here are some links to continue reading:

You can reach me directly at mail@flo-mue.de.

Publicat per Albert Astals Cid a 10:13 PM No comments:

Linux App Summit 2019 schedule is out!

We have a bunch of interesting talks (sadly we had to leave almost 40 almost as interesting talks out, we had lots of awesome submissions!) ranging from flatpak and snaps to how product management is good for Free Software projects with some thought provoking talks thrown in to make us think what's the future of our platform.

I am going and you should totally come too!

The attendance is free but please register at https://events.linuxappsummit.org/ 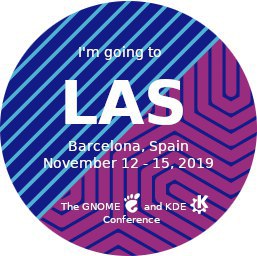 Publicat per Albert Astals Cid a 12:43 AM No comments:

Note 1: This is not KDE or Free Software related, if you're not interested, stop reading, no one is forcing you to read
Note 2: Yes, this is still going to Planet KDE, KDE friends and colleagues ask me about it almost every time we met, so there's definitely interest
Note 3: You're more than welcome to comment, but remember this blog is my house, so don't complain when i don't tolerate stuff i wouldn't tolerate at my home

You may remember Catalonia held an Independence referendum 2 years ago, lots of things have happened since then, I'm going to try to summarize, if you're interested in my initial reaction read my blog from that very same day.

On October 27 2017, following the referendum results, the Parliament of Catalonia declared Independence by a majority of 70 out of 135 MPs. That was mostly ignored by every single country in the world. A few hours later the Spanish government used bigger-army-diplomacy (AKA article 155 of Spanish Constitution) to decide that the Parliament of Catalonia would be suspended and new elections would happen in Catalonia on December 21.

On November 2nd 2017, a judge put most of the Catalan government in jail with the charges of "you've been terribly bad".

They still remain in jail awaiting for trial results (trial finished a few months ago).

Notable exceptions of government officials not in jail are president Carles Puigdemont and Ministers Clara Ponsatí and Toni Comín, that exiled themselves to other European countries. Spain has tried several times to get European countries to extradite them to Spain because "they've been terribly bad", but that has failed every single time, so they ended up revoking the extradition requests.

Elections happened on December 21 2017, and to shocking surprise of no one, almost virtually the same results happened if you count the pro-independence vs anti-independence blocks.

Since then the Catalan pro-independence government has been basically very low-key in their actions.

Meanwhile, Spain had a its own elections in April this year. They did this nice thing of letting the jailed (but still not sentenced to anything, so innocent) Catalan politicians run, and several of them won Congress seats. Then they said "oh but you know, you're a very dangerous person, so we're not going to let you attend Congress sessions". Not that it matters now, since Spain is unable to govern itself and is having it's 4th election in 4 years this November.

We also had elections in the European Union, and you know what? The same happened! They let catalan-jailed politicians run but then they decided they would not let them take the seats. Actually, this time is even worse since Carles Puigdemont and Toni Comín, that are living in Brussels without any extradition petition (i.e. they're basically free citizens of Europe), have also been rejected from taking their seats for some esoteric reason.

As a "fun fact", in late 2018 some Spanish regions had elections. Andalucia was one of them and the current government is a coalition of PP+C+VOX, i.e. right wing conservatives, right wing liberals and ultra right wing nut-jobs. One of their first decisions was to put away 100000 euros for grants to teach Spanish to Spanish born people (not for helping immigrants, they're right wing crazies after all) living in Catalonia that don't know how speak Spanish. I'm 99.99% sure the number of people that matches that description is very close to 0 people. You heard well, the poorest region of Spain decided to subsidize the 4th richest region for something that is virtually useless. Thanks!

Much less "fun fact", last week Monday, the Spanish police decided to detain 9 pro-independence people (later to be 7 since 2 were let go) with terrorism charges. The investigation is on-going and technically it should be secret, but we've seen pictures all over the news of what the cops say to be material to make bombs, and all i can see is a pressure cooking pot and some fireworks used typically for Ball de diables.

I don't want to 100% rule out this people having actual plans to do something nasty, but Spanish police/judges/state history of just fabricating charges against people they don't like is so long (An anarchist recently spent *18* months in jail awaiting trial for tweeting stuff "Goku lives, the fight continues" to be then just found innocent after trial) that i would not be surprised either if this is just Spain doing bigger-army-diplomacy again.

TL;DR: Everything is fucked up and I can't really see a way out at this point.
Publicat per Albert Astals Cid a 2:01 AM 3 comments: