Poppler finally has support for embedding fonts in PDF files!

Why would you want to embed fonts in PDF files are you probably asking yourself?

Short answer: It fixes issues when adding text to the PDF files.

Poppler has had the feature of being able to fill in forms, create annotations and more recently add Digital Signatures to existing PDF files.

This works relatively well if you limit yourself to entering 'basic' ASCII characters, but once you go to more 'complex' characters, things don't really work, from the outside it seems like it should be relatively simple to fix, but things related to PDF are never as simple as they may seem.

In PDF each bit of text is associated with a Font object. That Font generally only supports one kind of text encoding and at most 'only' 65535 characters (65535 may seem a lot, but once you start taking into account non latin-based languages, you quickly 'run out' of characters).

What Poppler used to do in the past was just save the text in the PDF file and say "This text is written in Helvetica font", without even really care to specify much what 'Helvetica font' meant,  and then let the PDF viewer (remember when we save the PDF file, it will not only be rendered by Poppler again, but potentially by Adobe Reader, Chrome, Firefox, etc.) try to figure out what to do with that information, which as said usually didn't go very well for the more 'complex' characters.

Enough of technical talk! Now some screenshots to show how this has been fixed for Text Annotations, Forms and Signatures :)

Writing "hello↓漢you" to a form 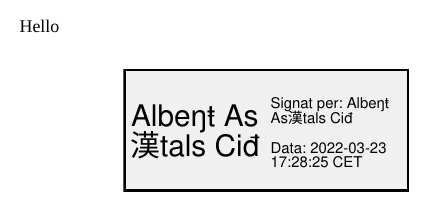 Writing hola↓漢字 in a Text Annotation